Gwoza is a community in northern Nigeria that is over 90% Muslim. As recently as six years ago it was inconceivable to imagine any birth control or family planning options. They were regarded as taboo. The accepted norm was that  “God gives children and God will provide for the children”. It was therefore not unusual to see women giving birth to 10 or more children. The cultural belief system encouraged the high rate as the more children a women had, the more respect she received  from her husband and the greater her status within the  community.

Six years ago, PPFA (Planned Parenthood Federation of America) started to bring a new perspective to these cultural beliefs. Traditional rulers and district heads are  recognized as gate keepers in the community; they are the custodians of the native laws and customs and as such, are revered and respected. PPFA spent considerable time convincing these rulers that family planning would benefit their communities.

The main street in Gwoza is, in fact, the main thoroughfare in this area. Many young men loiter around here-  the unemployment rate is upwards of 40% and educations doesn’t seem to be a serious option in this part of the country. PPFA health care workers attract the attention of these young men with bullhorns and informational posters and the promise of free condoms. 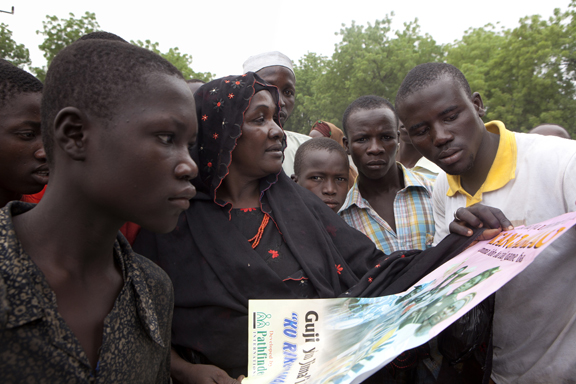 This poster reads: “Your wives/women are like your farmlands. If they are given a break from childbearing/adequate spacing of child births, their health and well being is at its BEST”. There was a great deal of interest expressed by these young men in what the health care workers had to say. 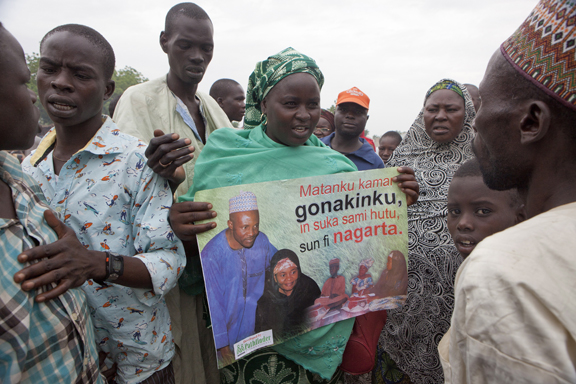 Thank-God Okosun, here dressed in blue, is the main PPFA officer in charge of programs here in Gwoza. Here he is shown handing out condoms. The few times I saw this activity, it always resulted in a “condom riot”,  as these young men pushing and shoving, tried to grab as many as possible. The chaos that ensued ended very quickly when someone in the crowd ran off with the majority of the condoms. The second of these photos shows a tall young man fighting off  his cohorts. He ran off with the condoms immediately afterwards. 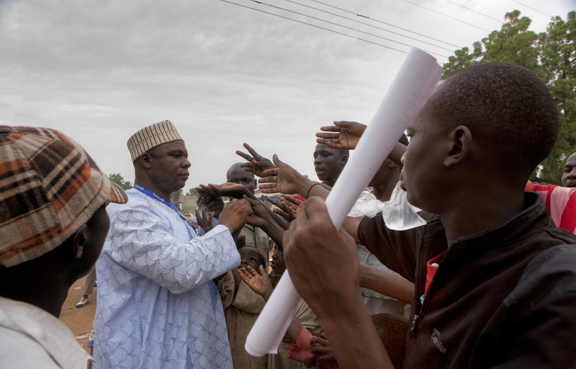 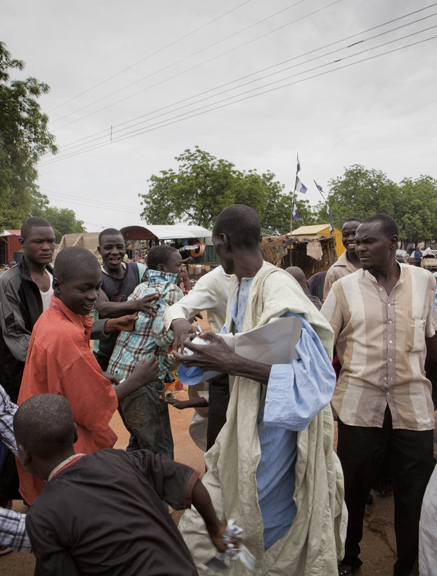 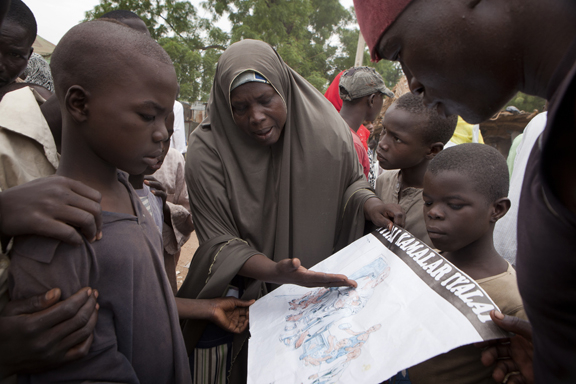 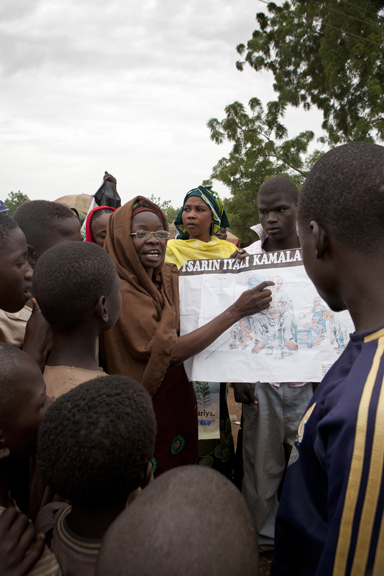 Another health care worker with poster reading “ One of them ( boyfriend/girlfriend) may be carrying the disease HIV but your eyes cannot tell. Stop having sex without protection. Stay faithful to your partner”. 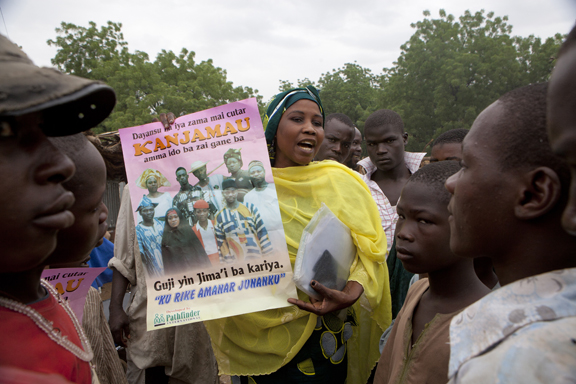 These male motorcyclists are in a procession to visit the Emir of Gwoza.  By distributing condoms and birth control pills to their peers, these commercial motorcyclists aid PPFA. PPFA also use them to mobilize community members during reproductive health public campaigns, seminars and ‘special days’ such as World AIDS day. 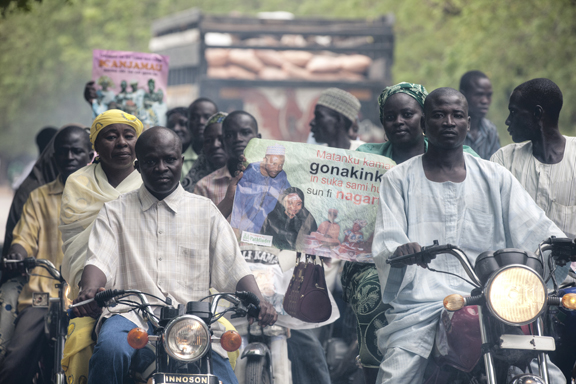 The Emir of Gwoza 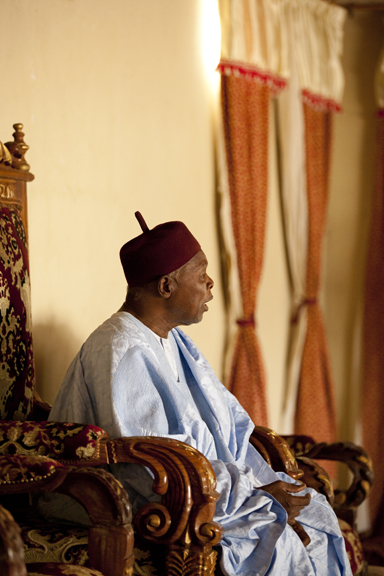 Thank-God Okosun and members of the community involved in PPFA’s efforts address the Emir in a show of appreciation for his wisdom in encouraging family planning programs in his community. There is significant  difference in acceptance of modern family planning in Gwoza and adjoining communities as compared with six years ago. At that time it was taboo to mention family planning because of the dogmatic religious and cultural norms. I believe it is important to note that at this point in time family planning refers to spacing out the time between births; it is still the women’s role in the culture to have many children. 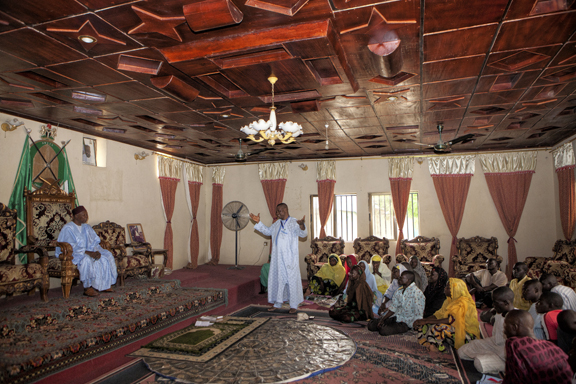 The Emir’s musician ( the Pied-Piper of Gwoza) leads a group to the main market. The musicians not only draw the attention of the men and boys; their presence lends an air of acceptability to the message of the health care workers. 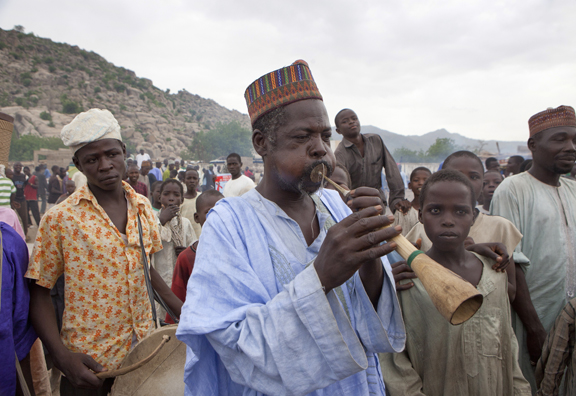 Health care workers in the marketplace using bullhorns and posters to convey their family planning messages. 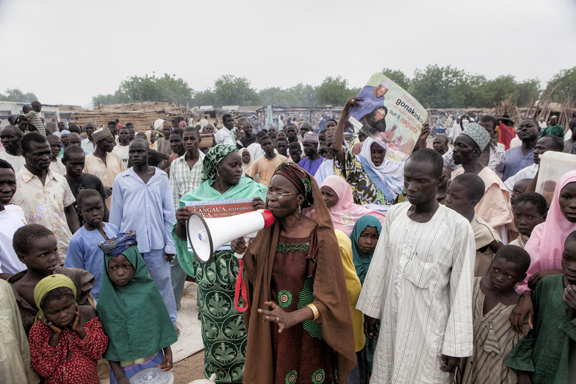 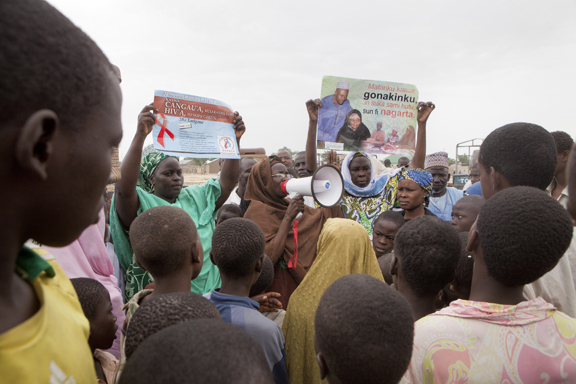 A  pool table in the market. I can’t help but wonder how this surreal scene came to be. 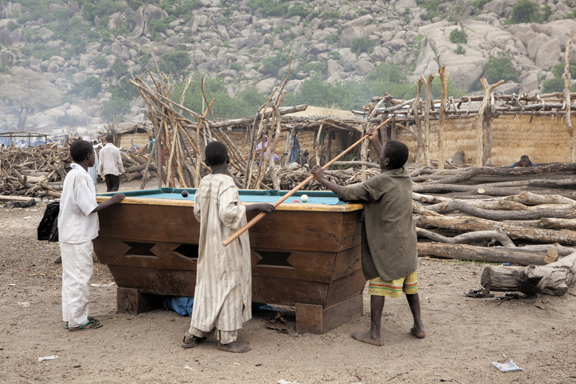 A clinic in Gwoza. These young women were pregnant for the first time and were waiting patiently to see a health care worker. 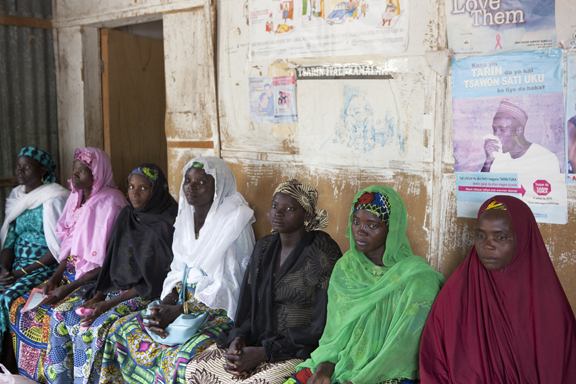 A health care worker lectures on the the process of having a health baby. 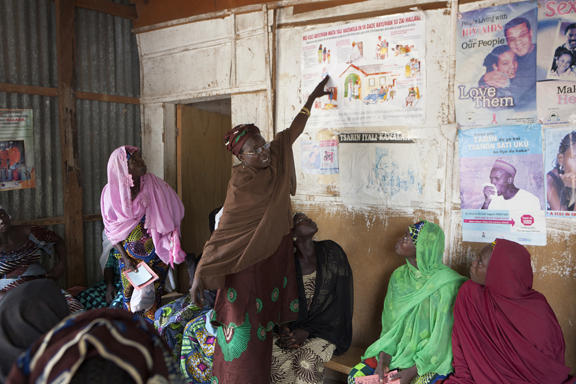 These young women appeared to be none too pleased about the prospects of their pregnancies.  They were very sad and introspective and I can only imagine that they were concerned about their futures. 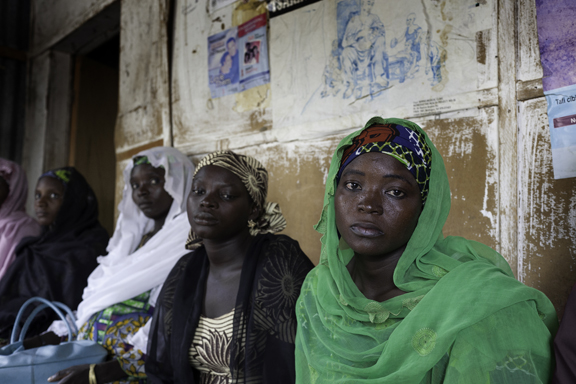 This was the only women I saw with a full burka. I didn’t know the relation between the woman and her baby with the woman in black. They were waiting outside the clinic. 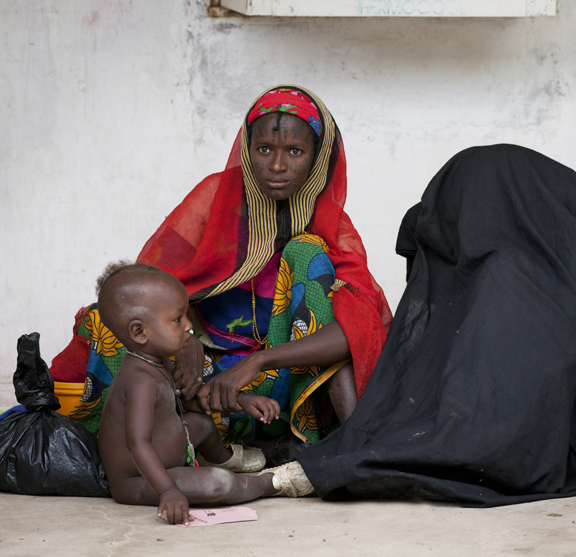 A health care worker demonstrating the proper use of condoms to male and female peer counselors. 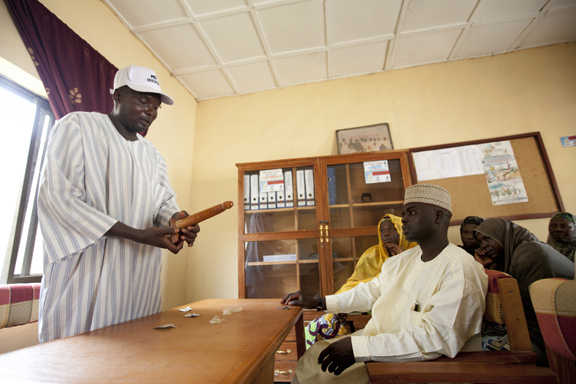 Women who had come to testify in appreciation of the PPFA programs. I asked  the women how many children they each had and was a bit taken aback when it averaged 7.5. Thank-God explained to me that most of these women already had the majority of their children before access to family planning was available and now they can safely spread out their births.  It was not unusual to find mothers with up to 15 children each before birth control programs became available. 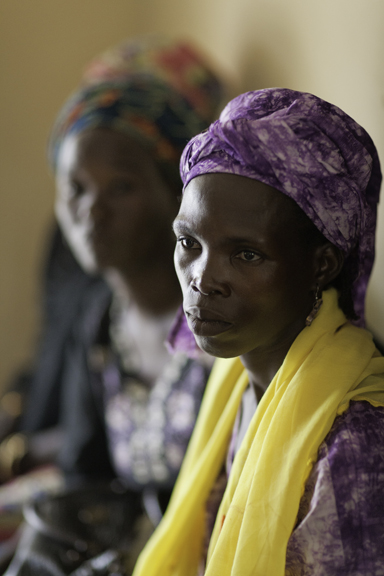 We then visited the home of a traditional birth attendant. There were at least 30  young mothers with their children sitting outside in the courtyard waiting to see her. 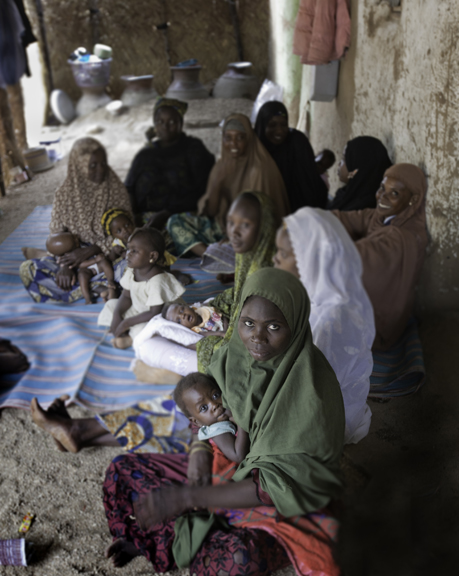 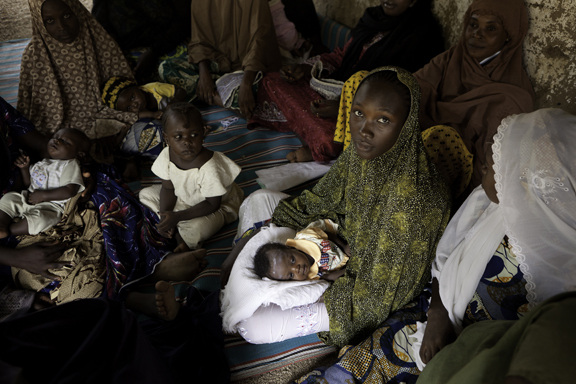 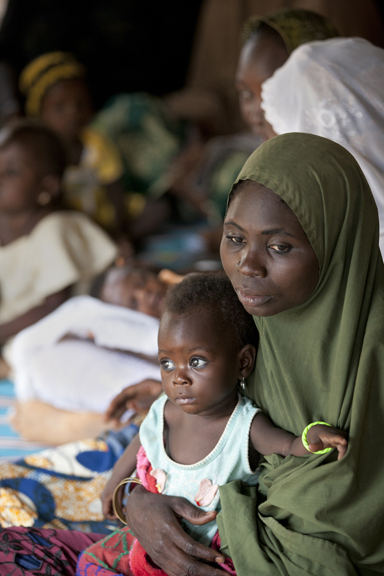 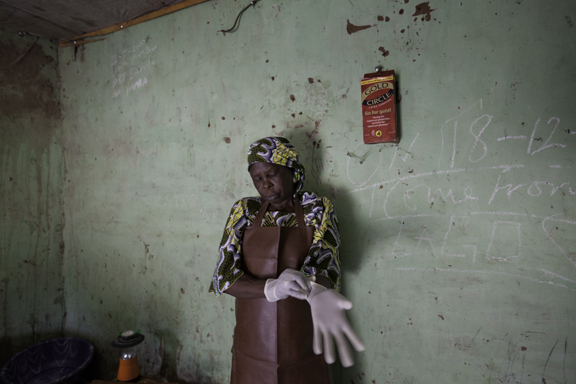 Bed where mothers give birth 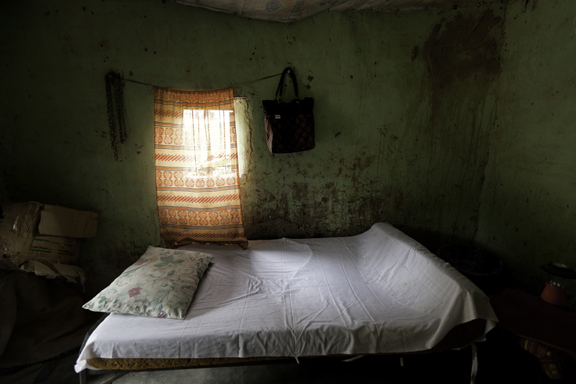 The traditional birth attendant counseling mother about to give birth. 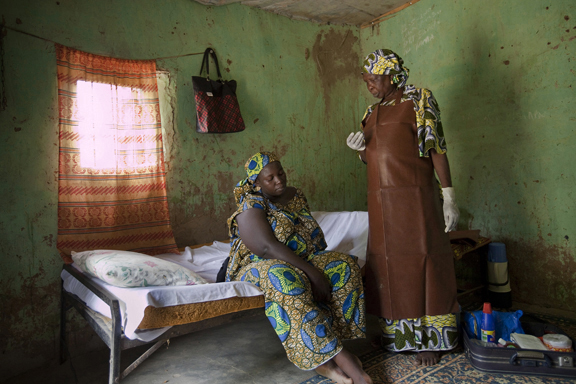 The experience of documenting the activites of PPFA in Gwoza left me with conflicting impressions. On one hand, the fact that each women was still having between 6-8 children was a bit overwhelming. Seeing all the young men on the streets and envisioning each of them having at least 6-8 children without any opportunities for education or meaningful productive work would only foment the some of the chaos that I experienced.  Yet, in six years of programming, Thank-God and PPFA had made significant progress. Changing a culture is a formidable task and in a relatively short period of time, they had made a difference. It is in places like Nigeria where I meet people like Thank-God who I hold in such great respect. He is doing heroic work trying to improve the lives and health of this community, especially the women who still have no other choices but to be mothers with many children. The progress PPFA has made is  impressive, especially when one delves into the religious and political climate in this area of Nigeria. I have recently read The Tenth Parallel by Eliza Griswold, a book I highly recommend. It is, as the subtitle suggests, the fault line between Islam and Christianity and it goes all through Africa and Asia and it passes through the region of Nigeria where I did my work.  Here religion comes in only one flavor- fundamentalist- and there are frequent conflicts and massacres between Christians and Muslims.

In Nigeria,  government corruption is a fact of life and people can expect no services from the government. ( I’ll elaborate on this in a later post). According to Human Rights Watch,  politicians have reportedly embezzelled between $4 billion and $8 billion annually.

To quote from Griswold:

“Despite the country’s vast oil wealth, more than half of Nigerians live on less than $1 a day and four out of ten are unemployed. Being a citizen of Nigeria means next to nothing; in many regions, the state offers no electricity, water or education. Instead, for access to everything from schooling to power lines, many Nigerians turn to religion. Being a Christian or a Muslim and belonging to the local church or mosque…. has become the way to safeguard seemingly secular rights.”

“Nigeria’s population is growing at a rate of 2 per cent a year- dramatically faster than the global average…..When it comes to religious competition, population is an undeniable asset.”

In this climate, the fact that Thank-God, with the support of PPFA and the Packard Foundation, has brought family planning programs to Gwoza that have been accepted by the community, is indeed remarkable.